While English is the official language in Hawaii, two others will be heard while you are here, Hawaiian and the ever-present Pidgin. While you can visit Molokai knowing and using only English, you will acquire a feeling of “belonging” the more you use Hawaiian and Pidgin words and phrases.   This article will provide a simple introduction to both.

The Hawaiian language contains only 13 letters, – five vowels, seven consonants and the ‘okina, which is called a ‘glottal stop’ in English. The okina indicates a break in the sound when the word is spoken, like the break when you say “uh oh” in English. Simple, right?

Here is the Hawaiian alphabet;

Here are the four basic rules,

~ All words end in a vowel.

~ Every consonant is followed by at least one vowel.

~ Every syllable ends in a vowel.

~ Two consonants never appear next to each other.

The okina is only found between two vowels or at the beginning of a word.

Either pronunciation is acceptable, but often a missing okina will change the meaning of a word.

Another grammatical mark is the kahako, a symbol that looks like a dash (-) that is placed over a vowel. It means that it is a long vowel – simply drag the vowel out a bit longer.

The vowels are pronounced pretty much as in Spanish,

Traditionally, the W in Hawaiian sounds like the letter “V” in English.

Vowels are pronounced separately except when they appear as diphthongs.

‘OI’ as in the word voice 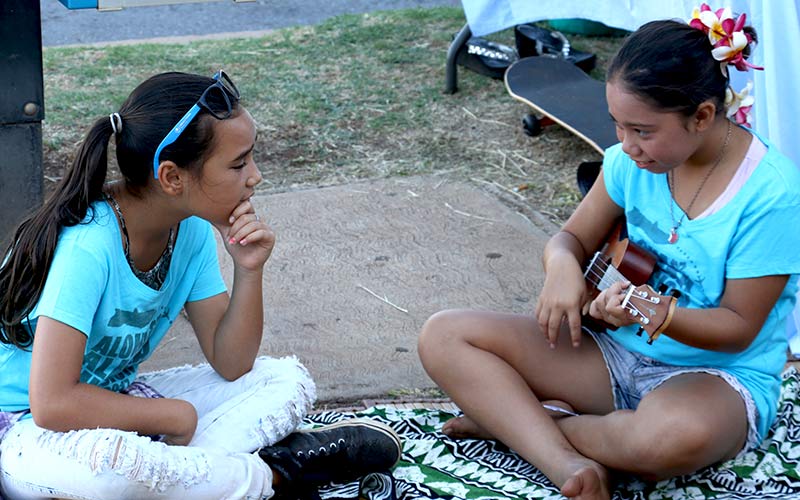 An den? – and then? So?
Any kine – any kind.
Azright – that’s right.
Bo da dem – both of them.
Braddah – brother.
Brah – friend, buddy.
Brok da mout – tastes delicious.
Bumbye – When we get around to it, after a little while.
Bummahs – bummer, too bad.
Choke – Meaning “a lot of something”, many, a large amount.
Choke Cars – Heavy traffic.
Da Kine – The real thing, a whatchamacallit, “you know what I mean?”
Dat – That.
Dirty Lick’ns – A Spanking.
Eriding – Everything, all of it.
Eh! – You know!
Fadda – Father, Dad.
Fo’ Real? – Are you serious?
Fo’ Shua! – For sure!
Geev’ um – Give it to them, go for it,
Grind – eat.
Grinds – food.
Haad Rub – Having a hard time, Bad time, feeling uncomfortable.
Hawaiian Time – Late.
Ho Brah – Prelude to describing something intense or amazing.
Howzit? – What’s happening? How’s it going?
How you figga? what do you think?
Huli Huli – To flip over and over, rotisserie, also barbecue, like in Huli Huli chicken.

Jalike? – Would you like to (do something)?
Junk – Not good, lousy, rotten.
K den – OK, agreed.
Kaukau – food or chow.
Ladat – Like that.
Lesgo – let’s go.
Like Beef? – You want to fight?
Local Style – Anything typical of the way things are done in Hawaii,
Lolo Buggah – A stupid or crazy guy.
Lua – Bathroom.
Lolo – dummy, stupid.
Mo bettah – much better.
Moke – large local tough guy.
No Ack – Quit showing off.
No can – cannot, not possible.
Ono – tasty.
Onoliscious – very tasty, delicious!
Pau hana – finished work for the day.
Planny – A lot, plenty, plentiful, choke.
Slippah – thongs, slippers.
Stink eye – mean or dirty look.
Talk stink – speaking badly about someone.
Talk story – rap, chew the fat, chat.
Tanks – thanks.
To da max – all the way, most you can get.
Try Move – (Please) move out of the way.
Try Wait – (Please) be patient.
Wat Doing – What the “bleep” do you think you’re doing??
We Go – Let’s get out of here, split.